Mizuho Securities USA has conducted a new survey recently in a bid to find out the plans of the users of the online payment giant PayPal regarding their usage of Bitcoin. In its survey, the United States investment banking subsidiary of Mizuho Securities was able to find out that approximately 65 percent of PayPal users have revealed their interest in using the world’s largest digital currency by market cap Bitcoin for purchases.

The survey called “Proprietary Mizuho PayPal Bitcoin User Survey” revealed interesting results. Out of the all users of PayPal, 65 percent have said that they are gearing up for using Bitcoin for making purchases at 28 million merchants of PayPal. This means that a major part of the user base of the online payment firm is inclined toward utilizing the leading digital currency for paying merchants. 25 percent of them said that they do not intend to use Bitcoin for making purchases. 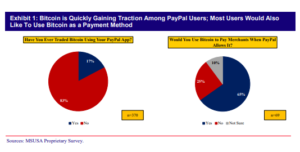 The survey’s results show that the payment giant is still facing a challenge in diverting the attention of non-bitcoin traders toward Bitcoin. As per the survey, just eight percent of non-bitcoiners have revealed their plan to use PayPal’s application for trading Bitcoin in the future.

While reporting another finding of its survey, Mizuho stated, “About 50% of PayPal bitcoin traders reported increased usage of the PayPal app after beginning to trade bitcoin. This compares with just 9% who reported reduced engagement.”

This survey has come one month after the online payment giant announced to add trading support for the top digital currencies including the first-ranked cryptocurrency Bitcoin. A few weeks before, PayPal opened the full cryptocurrency trading service for all of the eligible customers in the United States after removing them from the waiting list.

Now is the time for cryptocurrencies to go mainstream

Meanwhile, the Chief Executive Officer (CEO) of PayPal Dan Schulman is talking positively about Bitcoin and other cryptocurrencies. While talking about the future of digital currencies in the Web Summit online conference on the 2nd of December, Schulman has said that now is the time for them to go mainstream.